CREATED AND PRESENTED BY THE KNIGHTS OF THE BOSTON COMIC BOOK ROUNDTABLE:

AND PUBLISHED BY ROHO OF RIVERBIRD COMICS:

Welcome back my fellow graphic novel gurus to another edition of The Vigilant Geek. I am your host, The Vigilant Geek....  Well, now that we've taken care of the niceties, let me introduce this week's indie review. Straight from the heart of my hometown of Boston, Massachusetts, and presented by the brave and noble "knights" of the Boston Comics Roundtable and Riverbird Comics, I am thrilled and chilled to provide my take on the final installment of the popular BCR horror anthology, Hellbound. Ladies and germs, I am proud to present to you all: Hellbound V: The End of Comics.

Quite a few months have gone by since I've done a BCR review, (see Homegrown Horror: (1st Edition) Hellbound Vol. 3: Darkness, and also Venturing Outbound: Outbound Volume One), but once I got my hands on Hellbound V upon its December 2014 release, I new I had a publication that would get the blood pumping again. Just taking in the intricate and highly-detailed cover art done by Hellbound anthology legend and Riverbird Comics frontrunner Roho was enough to make the hairs on the back of my neck stand up before I opened the book. In regards to what happened when I opened this bone chilling collection of horror tales, I have taken a little time to talk about each story below:

By: Alison Burke and Tara Harris

Brunch, by Alison Burke and Tara Harris, is perhaps the best beginning to any horror compilation I have ever read. It starts out with two girls just sitting outside, eating meats on sticks. It appears to be just an average day in the city. However, when the reader unfolds the page, the scenario is anything but average, as a giant, squid-like monster has destroyed Boston!! 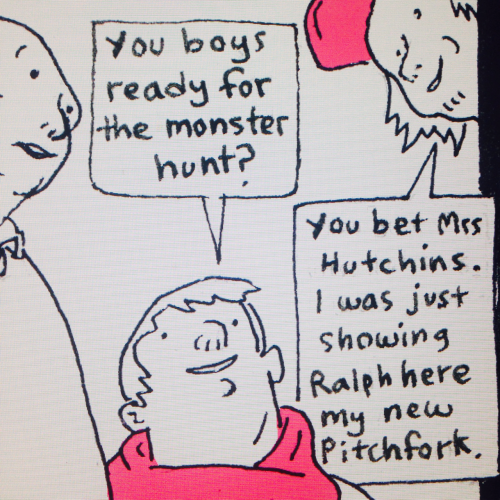 This brilliantly fun horror/comedy blend is the handy work of Ben Doane. The story begins with preparations for the local "monster hunt," where the whole town is shining their new pitchforks and getting ready for the big community event. However, when this year's monster calls in for a personal day, due to some advice from his therapist, the monster hunt organizer must find a replacement. This leads to a terrible afternoon for the organizer's assistant Steve, who is asked to fill in as the monster, and to "take his face off." When Steve complies reluctantly, he finds himself left alone in the woods with his face actually detached as the organizer goes to fire the starting pistol!

A History of the Hollywood Musical: 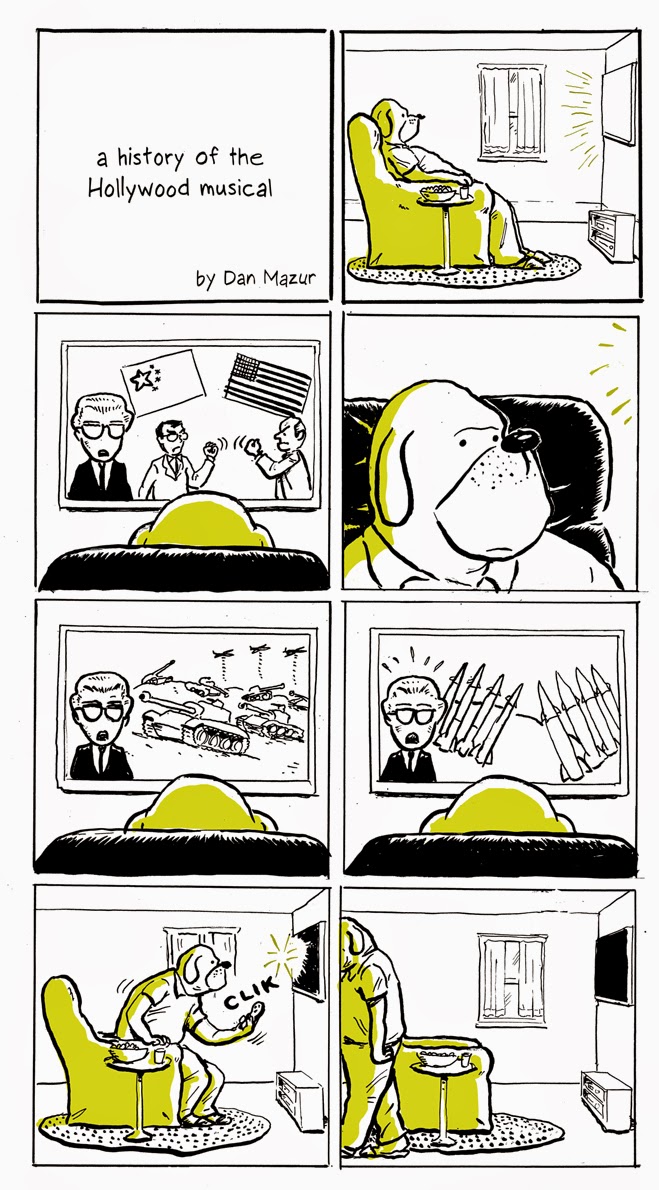 A History of the Hollywood Musical, written and illustrated by BCR veteran Dan Mazur, is perhaps one of the smartest stories in the anthology, and also one of my definite favorites. An apocalyptic, end of the world scenario is depicted brilliantly through a dog that locks himself in his underground bunker after what is clearly shown on the television as a nuclear war and watches every hollywood musical he owns on video until he's seen them all. Once our canine friend has watched all of his videos and eaten all of the food he had stored away, he then goes upstairs, opens the front door and walks outside into the irradiated atmosphere. This was a very dark tale, but it was very brilliantly told through the use of the medium.

The Death of Love: 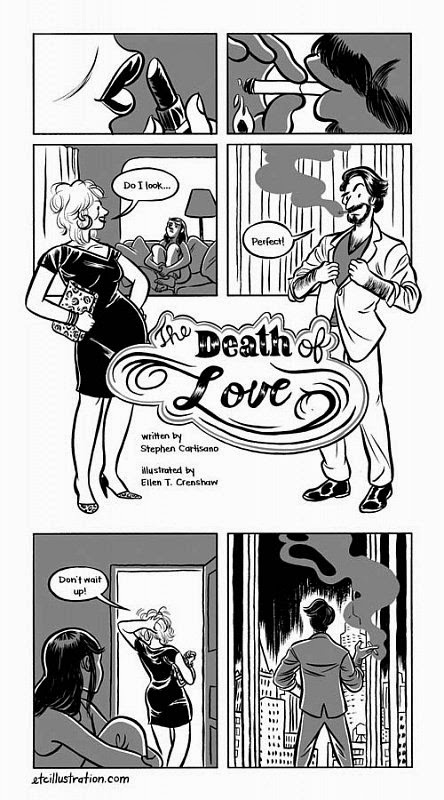 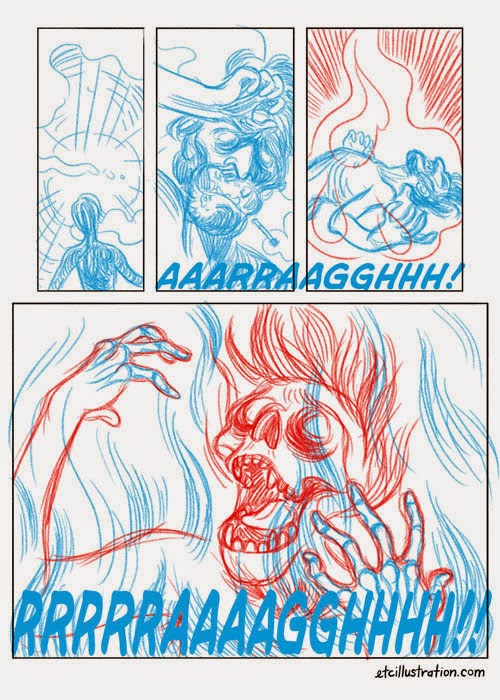 The Death of Love, written by Stephen Cartisano and illustrated by Ellen T. Crenshaw, is the ultimate tale of deception, and how karma always comes around to the deceivers. Our story unfolds at a nightclub called, "Life After Death," where a sleepy club owner named Aaron is always on the lookout for "new meat." However, when Aaron accidentally nudges the arm of a sexy lady named Bethany, his search for "new meat" was called off for the night. As Aaron and Bethany get acquainted, Aaron tries to impress her by taking her to the V.I.P. section to drink and dance the night away. This seems like an average night out for a couple of single youngsters, but when Aaron takes Bethany back to his apartment for some intimacy, he bites off a little more than he bargained for, as Bethany, fangs exposed, bites him in the neck! Aaron thinks nothing of the "love bite" until the next morning. The overconfident club owner, not knowing he was bitten by a vampire, opens the shades and is burned to death by the sunlight, proving that those in a constant search for "new meat" will eventually end up becoming "dead meat," or, uh, ash..

This uniquely horrific tale of telepathic turmoil, written by Patrick Flaherty and illustrated by Brenton Barnes, takes place in a lab where people's brainwaves are tested and recorded for data analysis, or so it may seem. A man walks in to test his brainwaves based on a working environment, and based on the things that he says during the testing, it is clear that he is an apathetic, lazy employee who likes to, "see what he can get away with." However, when the brainwaves are manipulated by an evil scientist that works at the facility, an inferno is created in the building across the street! Worst of all, since the scientist was able to transfer the brainwaves of the lazy employee into the minds of the firefighters responding to the scene, the same apathy is shown during the emergency, creating a scenario where the firefighters are passing the buck and not doing their jobs. When the woman who works with the scientist finds this out, it is too late, as the evil scientist strikes her to the ground with a baton! Somebody Else is a chilling depiction of what it would be like if brainwaves could really be transfer from person to person, and also how scary things could be if the wrong brainwaves were transferred to the wrong people! 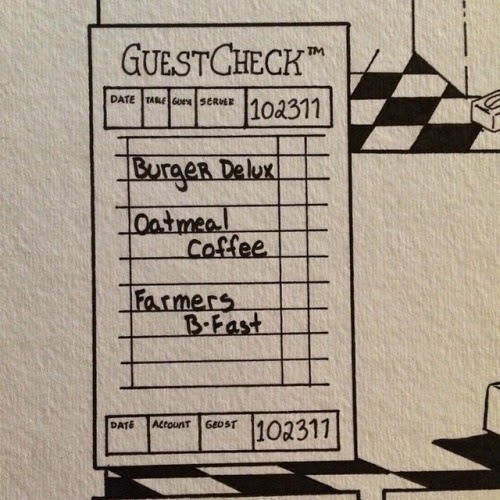 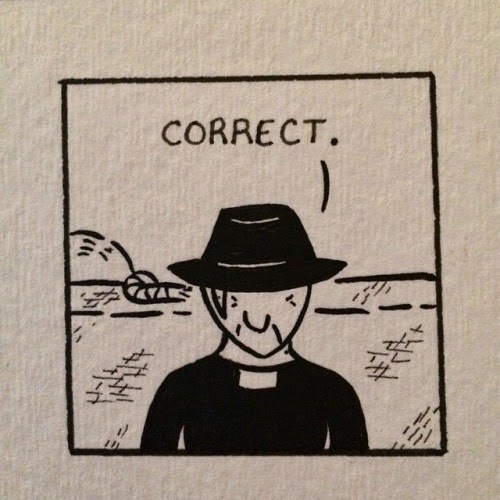 Blood and Breakfast, by Bonesteel is an eerie, morbid tale taking place inside a desolate roadside diner where two blood thirsty siblings have turned the local eatery into the local morgue. The "Madre" has met the siblings at the diner to figure out what the siblings want. However, when the siblings demand to get in on Madre's gun-running operation, the Madre decides the gruesome twosome was bad for business. The Madre gives them one last piece of advice, "acclimate to the real world before before it puts you six feet under." The serial killer siblings choose to disregard this advice, offing the Madre and sticking her corpse in a dumpster, then deciding to, "burn this world to the ground until they put us six feet under." Blood and Breakfast is a vivid look into the minds of two psychopathic killers who happen to be brother and sister, and made for a suspenseful, enticing read.

Everyone has been in that "honeymoon" period of a relationship, where both partners are so infatuated with one another, they smother each other and make everyone around them sick. However, in Consummation, written by E.J. Barnes and illustrated by Clayton McCormack, this scenario has escalated tenfold! As two long lost lovers unite in the wilderness, their love for one another cannot be  shown in a simple kiss. These two cannot get enough of each other, so much so that they seem to feel the need to break skin! As the two continue to unravel each other's epidermis's, they whisper sweet, creepy nothings at each other such as, "don't ever stop," and "never leave me." As the two lovers, now skeletons, gaze into each other's eyes one last time, they proclaim, "you complete me," leaving readers wondering, is some love just too much love? I think it's safe to say that in this case, definitely!