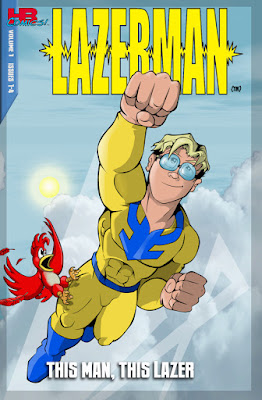 This publication completely surpassed my rather low initial expectations. When I picked up volume one, (which collects issues #1-4 and contains Lazerman's first story arc, "This Man, This Lazer"), I thought to myself, wow, this is the nerdiest looking superhero I have ever laid eyes upon... and "Lazerman" is such a lame character name. "Are these guys for real?" I said to a buddy of mine. Well, I was soon to find out that Chris Hebert and Alan Hebert Jr. of HB Comics were most definitely for real; and what they created in Lazerman, (as well as the other HB Comics publications), was pure graphic novel gold! This brilliant tribute to the classic comic book superhero was an absolute blast to read, and now I'm completely hooked on the "HB Universe"!
This story follows the trials and tribulations of Alex Sanders, a young college freshman and comic book geek in New York City who obtains power of an outrageous magnitude after attending a laser demonstration at a New York City science museum and is struck by the laser due to a mishap backstage involving a treacherous foe. After that fateful event, Alex realized that he can actually project laser beams from his fists, materialize force fields and of coarse fly! Dubbing himself appropriately as "Lazerman," Alex then threw on the finest yellow spandex that his best friend Walter was able to supply him with and flew out his dorm room window to go find evil-doers to thwart! Alex may have had a rough start to his new superhero career, but after finding himself face-to-face with a dangerous villain ironically calling himself "Razorman," he picks the hero gig up pretty fast. In the end, Razorman is no match for Lazerman, and Alex finally gets to live out his one big dream: saving all of NYC as a real life superhero, just like the heroes he's idolized in comics all of his life!
This publication was more than just a great story and a great tribute to the classic superhero. The softcover itself is of the utmost quality, with incredible penciling and inking. Also, the book is published in full color, and the coloring is simply phenomenal! Lazerman was the best surprise I have had the privilege to receive all year, and it's witty quips and puns throughout the story imprinted a permanent smile on my face throughout the entire read. Be on the lookout for this and more from the Lazerman title. The Hebert brothers and their staff at HB Comics aren't showing any signs of slowing down, and as far as I am concerned, their label is the next big thing in indie comics.

Find LAZERMAN and other great HB Comics titles at www.hbcomics.com 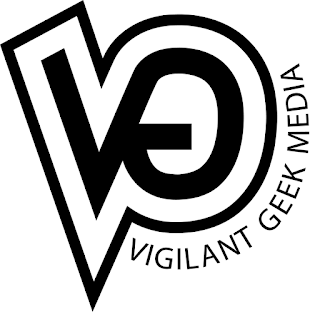