The DC Cinematic Universe and Gal Gadot: Does she make the grade?


The Formation of the DC Comics Cinematic Universe:

Unlike some of the comic book-oriented flops of yesteryear, most of today's more lucrative Hollywood blockbusters just happen to be comic book movies. Why is this, and why are people going crazy over superhero movies? Well, when Hollywood tried to capture the essence of some of America's most beloved comic heroes back twenty or thirty years ago, the special effects just didn't do them justice. In present day, Hollywood finally has the technological capabilities to do pretty much whatever they want. Plus, with the extra two or three decades of comic literature to fall back on, (which in my own personal opinion really started to blossom for both Marvel and DC during the 1980's) it becomes a real piece of cake for writers to throw together endless screenplays. We have all seen Marvel Comics capitalize on these resources for the past decade, being greatly immersed in their "Phase II" of Marvel flicks. (Phase II kicked off with Iron Man 3, and includes Thor 2, Captain America 2, Guardians of the Galaxy, Amazing Spiderman 2, X-Men: Days of Future Past and Avengers 2.) However, it seems DC Comics has not been as zealous as Marvel when it comes to pumping out films to commemorate their marque characters. Some fans may be overly-anxious and even slightly disappointed about this, but trust me, DC Comics has some great stuff cooking in their cinematic cauldron, and like the famous virtue states, all good things come to those who wait.
Warner Bros. has announced a few times since the release of Christopher Nolan's Dark Knight Trilogy that their goal is to create a Justice League full length motion picture within the next five to seven years. They are certainly taking the appropriate steps in accomplishing this goal. They set the tone for this endeavor with last summer's blockbuster, "Man of Steel," making Henry Cavhill their Justice League front man for all DC projects in the foreseeable future. Although the beloved Christian Bale Batman will not be appearing in any more DC motion pictures, Cavhill will return as Superman along with Ben Affleck as the new aging Batman in "Batman Vs. Superman," set to start production very soon. Another DC cinematic benchmark was 2011's "Green Lantern" film starring Ryan Reynolds. Although the film was criticized as a flop, most true Green Lantern fanboys and comic buffs enjoyed the film, as it stayed true to the literature and gave Hal Jordan his first appearance on the silver screen, something that wouldn't have been accomplished twenty years ago.
Another brilliant way DC has provided their marque characters with on-screen exposure is the new tv series' that have been coming out. WB's "Arrow," a thrilling, suspenseful account of Oliver Queen's struggles as the Green Arrow, has been knocking it out of the park as it heads toward the end of season two. Many other DC characters have been introduced through this series such as the mercenary Deathstroke, the assassin Huntress, the malicious marksman Deadshot, the psychotic villain Count Vertigo, and just about everyone else that ever had some degree of vitality to the Green Arrow story. Also, Barry Allen, (aka The Flash), just made his first televised appearance in many years on "Arrow," and Warner Bros. has stated that a tv series will start production very soon featuring the infamous speedster.

The question still remains, where does that leave us on the path to the Justice League movie? We have our Batman, our Superman, Green Lantern, (although Reynolds may have contract disagreements due to his role with Marvel Comics as Deadpool), a potential Green Arrow and a potential Flash. Surely we would have to at least see an Aquaman motion picture, (maybe starring Liam Hemsworth?), or a tv series in order to bring these characters full circle. Then perhaps just include Martian Manhunter and Cyborg in Justice League? Also, what about Wonder Woman? Well, DC and WB, (along with much input by director Zack Snyder) have already thought that one through. It is official, Wonder Woman has been cast in Batman Vs. Superman, and our amazon warrior is actress Gal Gadot. 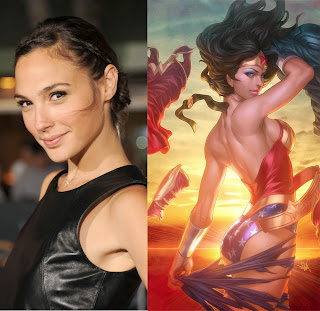 
Gal Gadot is an Israeli actress and fashion model, best known as the Miss Universe winner in 2004, and for her roles in the Fast and Furious films, Date Night and Knight and Day. There is no doubt that she will be the eye candy of the Batman Vs. Superman film, but is she really right for the role of Wonder Woman? I have had the pleasure of talking with some opinionated women and feminists on the topic, as well as a Wonder Woman buff, and most of them seem displeased with the casting decision. Wonder Woman, originally created by DC in 1941, was traditionally a tall, muscular amazon, (aka a large, ass-kicking woman) created in part to symbolize women's rights and sexual equality in America. It has been said by many that Gadot just doesn't have the build or the grits to play such a warrior woman. Although, being a typical male, and not a big Wonder Woman fan, I cannot say that I am personally displeased with the casting decision, (as Gal is a smoking hot babe) a lot of people have told me that they would have rather seen someone like Jillian Michaels (or a woman with a similar build) for the role.
Ok, so Gardot may not have any muscles, or much of a chest, but I do believe she has the grits for the role. After all, she did serve in the Israeli Army for two years, which couldn't have been a walk in the park. She also surpassed all the requirements necessary to win Miss Universe, which means she must be in incredible shape, and not for nothing, but Ben Affleck has had to bulk up considerably for his role as Batman, so why couldn't Gal bulk up for Wonder Woman? Put some nice red 5" heels on her feet, and in my opinion, presto; we have our amazon warrior. Please feel free to comment below on what you think about Gal Gadot as Wonder Woman, and any other opinions you might have on the DC cinematic universe.
Posted by Unknown at 9:18 PM